Taco Bell is a fast food restaurant chain which is based in Irvine, California. Taco Bell is actually a subsidiary of Yum! Brands, Inc. A large variety of foods are served at Taco Bell which includes burritos, tacos, nachos, novelty, quesadillas, and other special items. There are some value menu items as well in the restaurant. Taco Bell has more than 7,000 restaurants in the world which are serving more than 2 billion customers every year. 80% of the franchises of Taco Bell are not company owned and are holding the license from the company to run under their name. Taco Bell was the founded by Glenn Bell who was an entrepreneur; he started with a hot dog restaurant in San Bernardino, California in 1948. Bell was inspired by the Mexican restaurants in the town which sells tacos and people love them. He fascinated the long rows of people outside their restaurant and always wanted to find out how these recipes are made. Finally, the owners allowed him to see the restaurant and he got the recipe. He grasped the recipe and then opened a new restaurant named Taco-Tia in 1952 and started selling tacos to compete for the local restaurant. The biggest competitor and the market leader at that time was Mitla Café. During the coming years, he owned many restaurants in southern California. The first restaurant under the name of Taco Bell was started in Downey in 1962. The first franchise of this restaurant opened in Torrance in 1964 and the Taco Bell started to grow even further during 1967. During the same year, Taco Bell also opened their 100th restaurant. Taco Bell was purchased by PepsiCo in 1978 but later spun off as Tricon Global Restaurants which then changed its name to Yum! Brands. The key people in the company these days are Greg Creed who is the chairman and CEO of Yum! Brands and the CEO of Taco Bell is Julie Felss Masino. The revenue of Taco Bell in 2015 was recorded at $1.988 billion.

Sharing is caring. Submit A Coupon for Taco Bell here.

How to Use Taco Bell Coupon Codes?

Taco Bell uses the latest marketing techniques to attract customers from all over the world. Taco Bell provides different coupon codes and gift cards to the customers which can be used while dining at the restaurant. These coupons are printable and you can download them from the website of Taco Bell.  Taco Bell coupons cannot be used online, you can only use them while dining in at the Taco Bell. These coupons and the gift cards of the restaurant make sure that you get the best deals from them with the great value as well.

The process to use these coupons is very simple, all you need is to place an order at the restaurant and consume your food. At the time of checkout show the printed coupons to the cashier and avail amazing discounts from them.

How to Save from Taco Bell?

Some of the prominent offers of Taco Bell are given below which helps customers to save a lot on the restaurant. 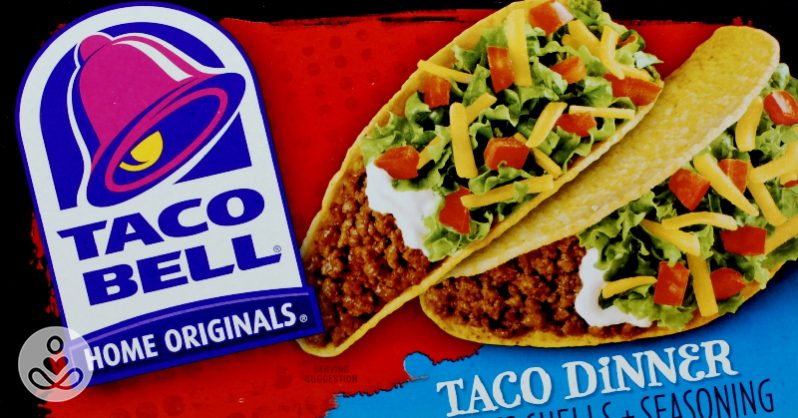 It is a known fact that Mexican food conquered America and people here love to eat Mexican cuisine and a big role in this love for the Mexican food is played by restaurants like Taco Bell which serves the best taste food to the people. Glenn Bell opened the Taco Bell when he was just 25 and loved to see people waiting in long lines for the Tacos at the restaurants. Glenn Bell himself was a regular customer of those Mexican restaurants and then started one of his own which surpassed all others in the country. Taco Bell served as a subsidiary of PepsiCo for many years and now owned by Yum! Brands. PepsiCo purchased the restaurant chain from Glen Bell in 1978. The first Taco Bell Express was also launched in San Francisco. The idea behind these restaurants was to launch small stores which focus on foods under $1. Most of these express stores were opened in airports, shopping malls, and other truck stops. Taco Bell also co-branded with famous restaurants like KFC, Pizza Hut and Long John Silver's. PepsiCo also tried many other Mexican recipes by launching different restaurants but it spun off its restaurant business in 1997 thus selling it to Yum! Brands. In the year 2000, around $50 million worth of Taco Bell shells were called back from different supermarkets. They had some corns which were not approved for human consumption. Taco Bell came to Yum! Brands and started experimenting fast and casual urban concepts in the restaurant. They decided not to sell traditional tacos rather fill them with American fillings. Traditional burritos were also not sold in the restaurants. The concept was not a success and failed in 2015 with the closure of all such restaurants. This time the company had another new concept for the restaurant which was known as Taco Bell Cantina concept and offered amazing and different menus to the customers which had alcohol served with the order. In 2016, Taco Bell launched another concept named as Taco Bell Catina stores which had 24-hour restaurant service for the people with a new menu and many other unique features in it. It also has alcohol with it and the best addition to it was a DJ. In 2017 Taco Bell made a new announcement that these stores will also host weddings. This new addition to the restaurant has only 10 locations in the country so far and has the plan to launch many more soon. Taco Bell also introduced private beta testing service in 2016 which allows customers to use an artificial intelligent bot on the messaging platform Slack to take an order of selected food and deliver it to the customers. The restaurant is looking to use this features in a better way in the coming months. Another good thing is that the hot sauces of Taco Bell were previously available on the Taco Stores but now available for sale in other stores as well. Taco Bell also faced a boycott from the employees in 2005 which demanded a rise in their wages and needed much better working conditions for them. Taco Bell agreed to all the terms and made an agreement with these employees.

Taco Bell is known as the best place in America to get fast burritos and Taco. People also love them for their special menu and offers which makes sure that you choose them over other competitors. The cooks at Taco Bell have something very special which makes sure public visits them every time. Taco and Burritos offered at their place cannot be eaten anywhere else. They have everything for you starting from Quesadillas and Chalupas. Another good thing about them is that they provide the pick-up and delivery service to the customers. You can visit hundreds of Taco Bell restaurants in the country providing some of the best Mexican-inspired cuisines to the people. Taco Bell app can also be used for the order and obviously, the online order is available on their website. You can pay while you order and pick-up your order whenever needed. During the online orders, they also allow you to customize your orders at the store and add the ingredients of your own choice. All the sauces, meats and vegetables of your choice are added to the food. The website also allows you to save your order for a faster order next time. The complete menu of the restaurant is also available at the Taco Bell website.

You will surely love the food served at the restaurant so make sure you visit the Taco Bell near you or order online to get the best Mexican cuisine in the country.